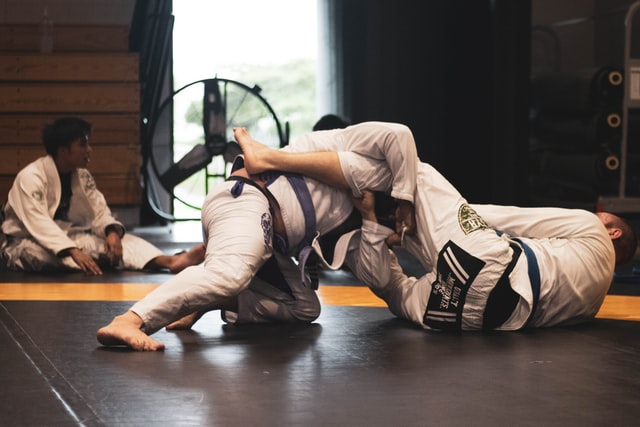 BJJ is a fascinating martial art that is becoming more and more popular. Therefore, it is no wonder that many people want to start Brazilian Jiu Jitsu training or are at least interested in a trial course. This naturally leads to a lot of questions before the first attempts in the ring. In this article we tried to give as much information as possible about BJJ for beginners.

Brazilian Jiu-Jitsu is the Brazilian form of wrestling and is a direct evolution of Judo. BJJ is an extremely modern martial art. It is creative, demanding and characterized by complex actions.

The concept of Brazilian Jiu Jitsu provides for a great peculiarity. During the fight even smaller, weaker people have a chance. Therefore, BJJ is also very popular among women.

What clothes are used in Brazilian Jiu-Jitsu?

In Brazilian Jiu-Jitsu, athletes predominantly fight in a Gi. This traditional suit is roughly comparable to a judo suit. Some training sessions take place without the Gi. These training sessions are mostly used for training self-defense as well as MMA fights. In both situations, the athletes do not wear a tear-resistant and stable Gi. After all, in the case of self-defense, attackers would also only wear street clothes such as a T-shirt or shirt.

In the so-called MMA ring, the fighters sometimes even compete against each other wearing only sports pants and with their upper bodies exposed.

However, not all techniques are possible without correct bjj gi and equipment, because the opponents can not be properly held.

The goal of Brazilian Jiu Jitsu

The goal of Brazilian Jiu-Jitsu is to perform the martial art as economically as possible. This sport bypasses all the techniques that depend on strength and speed. That is why BJJ is also called “chess on the mat”. In addition to a positive effect on increasing fitness, the sport is also suitable for self-defense.

How can you learn Brazilian Jiu Jitsu?

Many people don’t realize how many opportunities currently exist to learn Brazilian Jiu Jitsu from scratch. For example, new books or courses are appearing all the time. Even martial arts schools with BJJ on offer are moving more and more onto the market.

The classic beginning is visiting a club or martial arts school that offers suitable courses. Here you can exchange ideas with other like-minded people and quickly get feedback from the trainer. This way, no mistakes creep in with the techniques and you have a fast learning curve. Those who approach the matter with commitment can achieve great success after only 6-12 months.

However, the training is not designed for the best athlete in the group, but rather for the worst. Particularly capable people are therefore often bored or simply underchallenged. If so, for further improvements, you have to book individual lessons.

However, it is very difficult to put this knowledge into practice. The pictures alone are often not enough to internalize or even correctly perform positions without experience. Moreover, you quickly feel helpless.

First of all, you should familiarize yourself with the various basic terms so that you have an idea of what the trainer is talking about during the training:

Strength at the beginning of trainings

Another important point is to regulate your strength at the beginning, and especially to pay attention to clean performance of the various techniques. In Brazilian Jiu-Jitsu it is not the strength that counts, but the technique. Since this can not yet be well controlled at the beginning, many BJJ beginners try to compensate with power, or to enforce the techniques with power. This should be avoided at all costs, as one thus acquires a sloppy performing, which later must be laboriously corrected. There is no shame in fumbling, especially in the beginning.

Every failure brings new insights into what went wrong.

Another good method to practice specific techniques is to consciously use only this submission during rolling, for example, or to deliberately put yourself in a bad position to practice a newly learned escape.

Through constant training, athletes gain valuable practice in small competitions that can be called upon when needed. There are few differences between techniques for real-world use as well as in training. Therefore, athletes have to pay little attention to their opponents. At the same time, the techniques of the sport are designed so that physically superior opponents can always be controlled. Many self-defense situations are finished on the ground. However, an experienced BJJ fighter really proves his strength on the ground. This requirement is also a challenge for the biggest hitters. After all, opponents lie on the ground without strength.

It is not always clear whether Brazilian Jiu Jitsu is the right choice for beginners. However, it can be stated that this martial art is suitable for children, women, men and seniors.

If you want to learn a martial art with the motive of self-defense, you should also look into Judo, Karate or Krav Maga. In BJJ there are neither kicks nor punches. For defense, however, one should master both. A wide repertoire of techniques is mandatory here.

The Benefits of Beebread for Women

How to loosen stuck fasciae